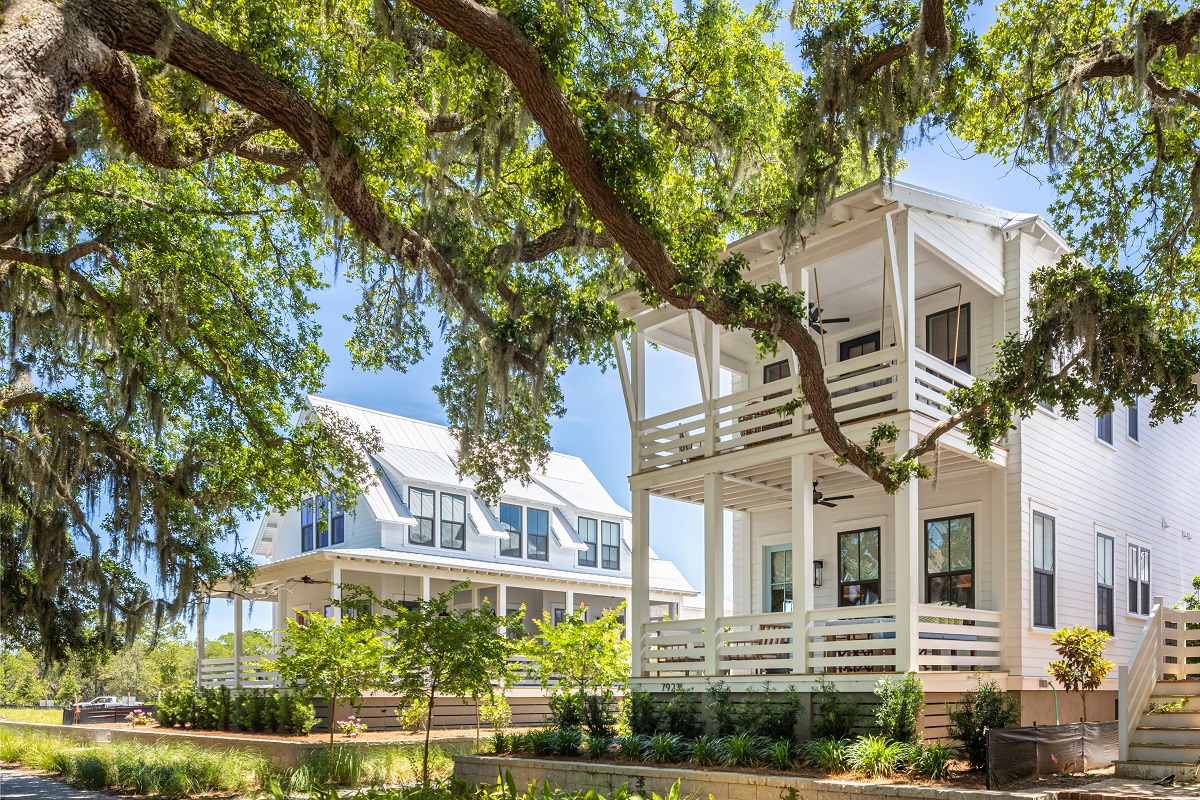 Situated in South Carolina’s renowned low country with stunning marsh and river vistas, Kiawah River is a new master plan community that encompasses over 2,000 acres and 20 miles of shoreline on Johns Island, a piece of land just roughly 15 miles from the Charleston city center and across the river from Kiawah Island.

The local developer behind the project, The Beach Co., aims to create a green, conservation community, employing principles of sustainability. Only half of the property’s 2,000 acres will be developed, with the remaining 1,000 acres existing as open space with a system of trails connecting the distinct pocket neighborhoods.

Since its inception, The Beach Co. wanted to embrace the site’s long agricultural past. Before it was considered for development, the land had been farmed for hundreds of years from Native Americans to fourth-generation local farmers, and, as a result, Kiawah River upholds the tradition and is now one of the area’s first agrihoods—a growing trend in which a working farm is an integral part of a residential community.

“The property that we own now—and our company has owned for over 25 years—was farmland,” says Chris Drury, Kiawah River’s broker in charge. “We tried to hold true to that heritage by maintaining the farm as a part of who we are.”

Still in the early stages, the development cycle is in its fifth year and in its third year from a real estate sales perspective. Drury says the community has entitlements to construct 1,168 dwelling units and has additional capacity for hotel rooms and villas as needed. He predicts the neighborhood will have 1,200 to 1,300 units at full build-out, with sales determining the completion year.

The community recently reported an unprecedented sales record in the first quarter of 2021. The sales team reported 49 homes and homesites sold or under contract since Jan. 1, 2021, surpassing their overall sales total for the previous year.

With an increased demand for new construction with a waterfront location, Kiawah River is attracting buyers from the Charleston region and beyond, including North Carolina, Georgia, Florida, Tennessee, New York, New Jersey, Connecticut, Pennsylvania, Texas, Ohio, Wisconsin, and Colorado.

“We are certainly trying to attract everything from families to retirees,” says Drury regarding the community’s target buyer demographic. “I think the general area of Johns Island has predominantly attracted the second-home and retirement markets because of its proximity to Charleston, but Johns Island is growing so rapidly that it is changing. While Kiawah Island might lean more toward second-home owners, we are leaning more toward primary owners.”

Residents of Kiawah River are eligible to participate in Kiawah River Farm’s Community Shared Agriculture (CSA) program. The CSA offers a subscription to receive weekly deliveries from the harvests of the community farmers.

According to the community’s website, some of the farm-to-table offerings include items from:

As for the more traditional community features, the team recently broke ground on its Spring House, a waterfront swim and fitness club. The 9,000-square-foot facility will serve as a gathering place with a family pool and an adult pool, a full-service kitchen and shaded bar with poolside dining, and fitness programming.

In addition to swimming and dining, the ground floor of the “first man-made amenity” will feature cabanas, a hot tub, a shaded children’s play and activity space, an outdoor fireplace with lounge seating, and a lower deck overlooking the Kiawah River.

The Spring House is expected to be completed in late summer and will later be joined by additional community amenities, including a roadside farm stand and market, a chapel and event hall, a riverfront lodge, a river-­view restaurant, and an environmental learning center and fish camp.

“We have lots of future development plans that will affect the property owners and enhance their lifestyle here,” continues Drury. “There’s so much potential and so much coming down the pike.”

Potential owners can choose from a portfolio of semi-custom home plans, created by Kiawah River’s Architect Guild in conjunction with the Builders Guild and the community’s Architectural Review Board, or purchase a pre-designed home in one of the community’s collections.

“The interest people have in these is based on their size and price,” says Drury. “They are our entry-level offering and start in the $700s, where the single-family custom homes start closer to $1 million.”

Ranging from 1,700 to 2,200 square feet, the Butterfly Garden Cottages are designed for outdoor living and include generous verandas, second-floor masters with private porches, and optional guest suites above garages.

For the 7923 Flagship Lane model, pictured throughout, the home boasts two levels, three bedrooms, three-and-a-half baths, and 1,778 of heated square footage. Upon entry from the generous front porch, guests are welcomed into the combined living, kitchen, and dining area. Farther back in the elongated plan, the team added a powder bath, a laundry room, and a main-floor guest suite.

Upstairs, the master suite sits toward the front of the home—with its own exterior porch that includes a hanging day bed for morning or night lounging—and the master bath is outfitted with dual vanities, a drop-in tub, a tiled shower, and a walk-in closet. The third bedroom suite and a hall linen closet make up the rest of the second level.

Due to the property’s flood plain, each home had to be elevated 7 feet off the ground. Sanford and her design team raised the entire plateau up 3 feet from grade and built the homes an additional 4 feet from there. The walls created pathways and little pocket gardens along the way and helped mitigate the scale of the height.

At the rear of the lot, owners each have their own detached two-car garages, with the option to build an additional guest suite above the space. Because the structures are separate from the main home, a small courtyard is created between the home’s rear entry and the garage. “Those little pocket courtyards are really nice for additional outdoor living space or gardens,” Sanford adds.

For its innovation and design details, the Butterfly Garden Cottages received an NAHB Best in American Living Award in 2019, where the judges praised the porches and the project’s response to its coastal vernacular.

The savvy law and legal veterans