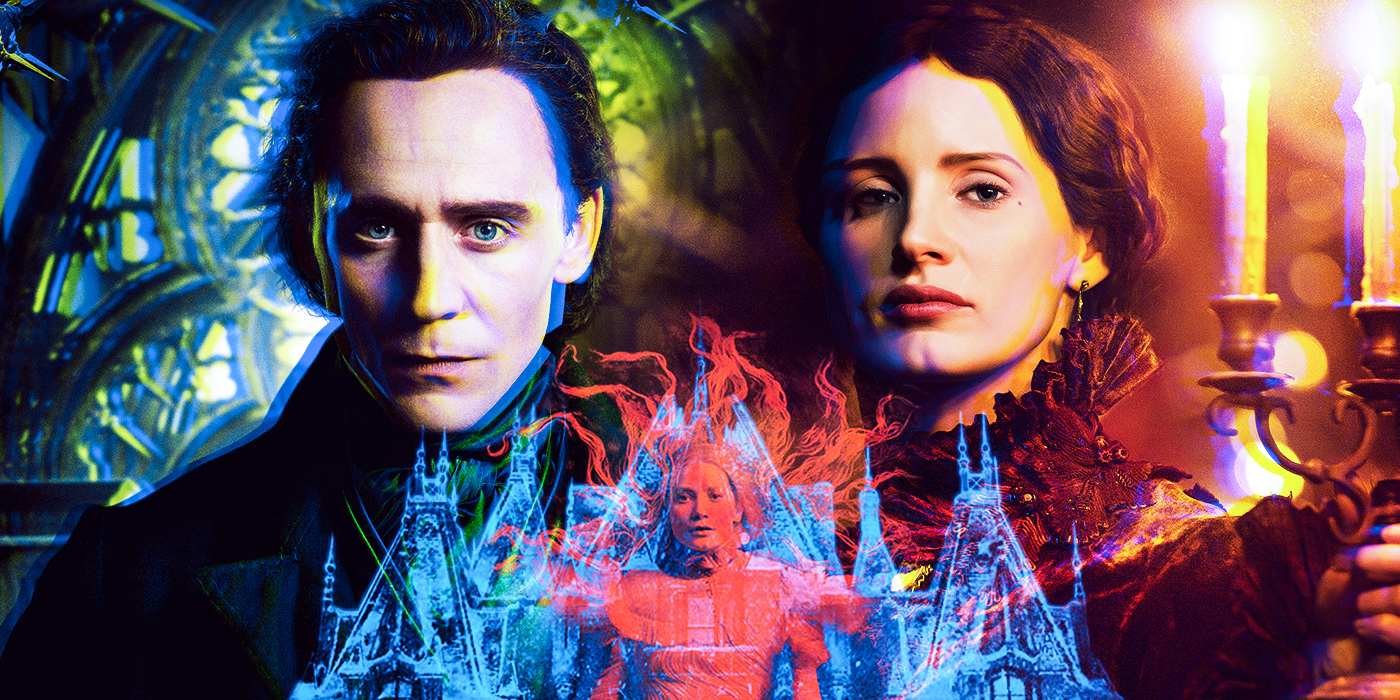 The most haunting moment of Guillermo del Toro‘s Gothic masterpiece Crimson Peak has nothing to do with the ghosts who roam Allerdale Hall. It’s not the building’s labyrinthian corridors lit like a nightmare aquarium, or the violent human betrayals at the heart of the film’s twisted romance. It’s a line of dialogue, six words long: “You thought you were a writer.” As Lucille Sharpe, Jessica Chastain delivers the line with effortless, casual cruelty to Mia Wasikowska‘s Edith Cushing, bound, poisoned, and watching Lucille burn the pages of her manuscript. Chastain’s entire performance is a masterclass in quiet contempt, but in those six words she does something especially chilling: She captures the exact voice familiar to anyone who has ever tried to create art on any level. That nagging, grinning ghoul at the back of your brain, the one that doesn’t even laugh at the art itself, but instead calls you an absolute clown for trying in the first place. “You thought you were a writer.”

Co-written with Matthew Robbins, the film surprised audiences who were expecting a gory, gruesome house-of-horrors thrill ride and instead got a lavish, melodramatic and deeply horny Gothic ghost story in the same vein as Jack Clayton‘s The Innocents or Alfred Hitchcock‘s Rebecca. To be fair to Del Toro, his main character, Wasikowska’s Edith, puts it plain within the first five minutes, explaining her manuscript to an uninterested editor (Jonathan Hyde): “It’s more a story with a ghost in it. The ghost is just a metaphor for the past.” The ghosts of Crimson Peak serve a similar purpose—they’re metaphors for the sins of the past, to be more specific—but they’re also a blood-red illustration of Del Toro’s relationship with the uncanny his entire career; his love for monsters and ugly things; the “horrible beauty” that’s underscored every one of his films since Cronos. Crimson Peak is neck-and-neck with The Shape of Water for the title of Del Toro’s most personal English-language film, but only Crimson Peak feels pulled from the most vulnerable parts of a singular filmmaker’s brain.

All of that is embodied in Edith, a character we understand from the jump as an aspiring writer, a character trait that never really has any bearing on the plot but is vital to understanding Crimson Peak. Before she is swept up into the marriage-and-murder plot orchestrated by Lucille and Thomas Sharpe (Tom Hiddleston), the conflict at the center of Edith’s life is as a woman who wants to be taken seriously as a writer in 1901. Thomas doesn’t snare Edith into his trap just by having Tom Hiddleston’s objectively attractive face, he compliments the work in a meaningful way. When Edith’s father (Jim Beaver) pays Thomas to “thoroughly break” his daughter’s heart, Thomas knows her heart is synonymous with her ambitions. Again, he embodies the voice that makes an artist feel childish just for dreaming.

“It’s absurdly sentimental. The aches that you describe with such earnestness. The pain, the loss. You clearly haven’t lived at all. In fact, you only seem to know what other writers tell you. You insist on describing the torments of love when you clearly know nothing about them. What do you dream of? A kind man? A pure soul to be redeemed? A wounded bird you can nourish? Perfection? Perfecton has no place in love, Edith.”

Crimson Peak can be divided into before and after the story reaches Allerdale Hall, both visually and emotionally. The moment in which Thomas carries Edith across the threshold is one of the most jaw-dropping images in Del Toro’s career, cinematographer Dan Laustsen emphasizing husband and wife’s human-scale smallness in the doorframe before 180’ing to reveal the manor in all its fucked-up funhouse glory. Color and design clash together so dazzlingly it’s hard to believe it’s a practical set and not an optical illusion. (Crimson Peak not getting a production design Oscar nod is an unhinged rant for another day.)

RELATED: The Films of Guillermo del Toro Ranked from Worst to Best

Most importantly, the moment feels like we’re slipping from reality into a dream, because thematically that’s exactly what it is. From this point on, the film’s Gothic undertones become blaring, cranked-to-11 overtones. The horror, the intrigue, the sex, the yearning, it all reaches melodramatic heights. That’s by design, and the ghosts are there to buoy you through the emotional tidal wave. “If you remove the ghosts, curiously, the acting style needs to change and be more grounded. And then, for me, the movie deflates,” Del Toro said in 2015.

But it’s also no coincidence that the story of Crimson Peak is the same kind of story Edith aims to write. This is Edith’s story internally and externally, the most vital clue coming during the credits. Before the film officially fades to black, we see a book cover — “Crimson Peak” by Edith M. Cushing. Behind it, charred paper, suggesting Edith pulled those manuscripts from the fire and turned her ordeal into a novel. It explains the heightened emotion, the dream-like setting, the perfect checklist of Gothic storytelling; it’s all representative of what Edith pulled from herself—the horror, the agony, and the ecstasy–to finally write her story. You want a metaphor for the creative process? Look to Edith taking a shovel and bashing the everloving fuck out of Lucille—that doubting voice, “you thought you were a writer“—before letting Thomas, her gentleman tormentor, the unhealthiest form of passionate inspiration, fade away.

To be very clear, trauma is not a prerequisite for creating art. If you’re feeling writer’s block, please do not become entwined with an incestuous pair of siblings looking to murder you for your family’s money. Take a long shower or something. Crimson Peak‘s ultimate lesson is much gentler, and it could only come from Del Toro. “Ghosts are real, this much I know,” Edith says twice, at the beginning and end of Crimson Peak, and the meaning changes in the interim. Not all ghosts need to be feared. Artists are haunted, by doubts, by insecurity, but also by ambition, by perseverance, by the pieces they’re able to pull out of themselves, and the result is whichever emotion is strong enough to linger.

“There are others, others that hold on to an emotion, a drive, loss, revenge, or love,” Edith says. “Those, they never go away.”

But had she booked ‘Invisible Man,’ she might not have been able to do ‘Mortal Kombat!’

Vinnie Mancuso is a Senior Editor at Collider, where he is in charge of all things related to the 2018 film ‘Aquaman,’ among other things. You can also find his pop culture opinions on Twitter (@VinnieMancuso1) or being shouted out a Jersey City window between 4 and 6 a.m.